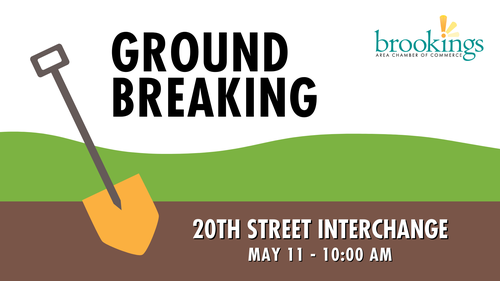 Join our partner agencies and local stakeholders as we celebrate the Ground Breaking for the 20th Street South Interchange!

Ground has been broken; the long-awaited 20th Street interchange project is officially underway. Phase one of the construction began on Monday, April 18th, a surreal feeling for many who have had a vision for this project for years.

The City of Brookings and Brookings County, alongside entities such as the South Dakota Department of Transportation and the Federal Highway Administration, had multiple studies done which all justified the construction of the interchange at 20th Street South (not the 32nd Street bypass as some might have assumed). Benefits included safety and efficiency, as well as future development opportunities.

Companies located on the east side of the interstate saw trends which supported the findings. Al Kurtenbach, co-founder of Daktronics, says “It was difficult for employees with children at home or in school to efficiently access their homes from their work,” said Kurtenbach. “They would have to go down 6th street over to 22nd. It was tough for employees to be engaged with their families during the day.”

And so, the 20th Street site was decided.

An informal committee was formed to continue the effort of bringing an interchange to Brookings. Individuals on the committee included Al Heuton, Keith Corbett, Daryl Englund, Van Fishback, Al Kurtenbach, Lee Ann Pierce. This committee of both public and private sector leadership was key to the success of the project.

Success of the second application had a few imperative elements. One was the public-private partnership to fund the project. The grant’s requirements required a certain percentage of the project be funded by the private sector. Van Fishback personally committed over $700,000 to the project, while Brookings County and the City of Brookings agreed to contribute $2,000,000 each. Fishback recognized this project as a prime example of what a public-private partnership should look like.

“Although we worked closely as an ad hoc committee, a lot of credit can be given to Lee Ann Pierce with the County and Keith Corbett with the City,” Fishback stated. “Both individuals gave their support not only in their public statement, but in their ability to garner support to give financially. Al Heuton was also a big champion in this project – he wrote both grant applications, which took a lot of time, research, and effort.”

Additionally, the group had significant help from Senator Thune’s office. With his support, as well as from Senator Rounds and Representative Johnson, the grant was successful
“I applaud the City of Brookings for its commitment and dedication to making this project a reality,” said Thune. “Once completed, this new arterial connection will bolster the city’s economy and provide new opportunities for growth and development.”

The City of Brookings continued working with HDR, who subcontracted the design work to Banner & Associates. Bids were put out with Bowe’s Construction being chosen as the prime contractor on the $15.3 million dollar project.

CEO and Chief Economic Development Director of the Brookings Economic Development Corporation Tim Reed sees big things for Brookings upon completion of the project. “The interchange will provide business growth and better connectivity as Brookings continues to grow south and east. When completed it will be a game changer for the Brookings economy.”
Construction of the bridge structure and all grading operations are scheduled to be completed in 2022, with the surfacing and final project completion scheduled for July 14, 2023. Questions regarding the interchange project can be directed to City Engineer Charles Richter.

The City of Brookings will hold a groundbreaking ceremony for the project on Wednesday, May 11 at 10 a.m. at 20th Street South. All are welcome to attend the celebration and hear from project stakeholders.